Leo has contributed music, sound and performance to various projects in the gallery and on stage. Some selected ones below… 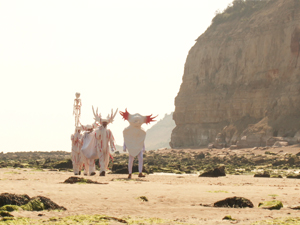 Commissioned by the Whitstable Biennale, a "Folk-Sci-Fi" short film set in a world where animals have "ended" and mourning them is taboo. Songs and sound design by Leo.

"...the 24-minute film teeters on the edge of plausibility yet ultimately delivers a darkly prescient take on our self-harming, planet-wrecking lifestyles..." Frieze Review. 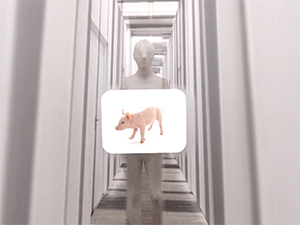 Leo provided unsettling arrangements of mediaeval music and noisy washes of synthesised sound design, mirroring the collision of images of an alternate reality in which characters embrace or resist a mysterious intelligent substance in this visually striking 'domestic science fiction', his third collaboration with the artist. 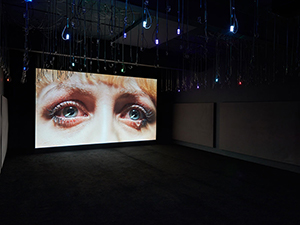 Part fairy tale, part body horror, Leo contributed music and arrangements to this stunning installation of film and choreographed light, shot on location in medical facilities and factories, his second collaboration with Marianna Simnett, following a live performance at the Serpentine Gallery in 2015 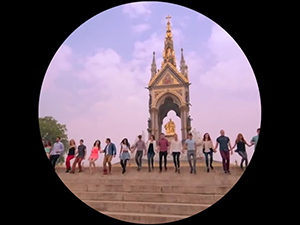 Film / installation by Jasleen Kaur for the V&A museum, London.

A vivid collage of shots of European locations, taken entirely from Indian films. The piece was projected onto the ceiling of Room 10a of the V&A Museum (Noble Living, 1350-1500), to uncanny effect. Leo wrote the soundtrack, based around recordings of harmoniums. 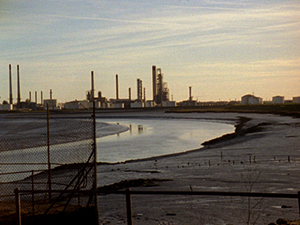 16mm film and installation by Frances Scott for the Focal Point Gallery, Southend. 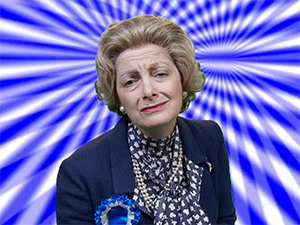 Film and installation by Jennet Thomas, for the Grundy Gallery, Blackpool, 2015.

Leo wrote the music (based on analogue synthesizer mutilations of pieces by John Dowland) for this extraordinary narrative video, a wild, science fiction exploration of the cultural "after burn" of the image and ideas of Margaret Thatcher. Toured the UK during Spring 2015, re-exhibited in a new installed iteration at Block 336, London, 2016. 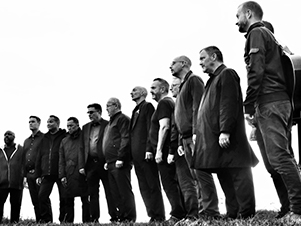 Performance by Jordan McKenzie for the Freud Museum, London.

Leo was one of twelve composers who contributed a song ("You Don't Need That Photograph") to this project, which set transcriptions of the lived experiences of members of the London Gay Men's Chorus, collected by psychoanalyst Susie Orbach. Jordan presented the resulting music at the Freud Museum, and on tour at UK festivals. 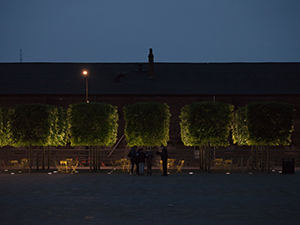 Site-specific performance in collaboration with Frances Scott for AIR Projects.

Taking place in the mysterious window of time precisely between civil twilight and sunrise on a May morning, a strange, quiet performance for singers walking through Granary Square, Kings Cross, London, based on words by William Wordsworth and devised by Frances Scott. Score and musical direction by Leo. 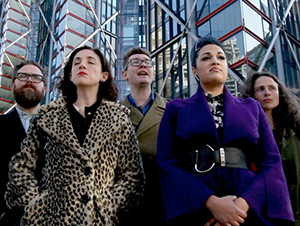 Taking as its starting point the 1943 political song "Stalin Wasn't Stallin", the piece featured five singers shot on location in London landmarks of economic and cultural power, coordinated as if by magic. Score and musical direction by Leo. 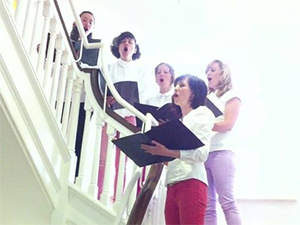 Score and performance in collaboration with Cerith Wyn Evans, commissioned by IMMA, 2013.

Leo collaborated with conceptual artist Cerith Wyn Evans on a new score for unaccompanied voices, for performance at the Irish Museum of Modern Art (IMMA). 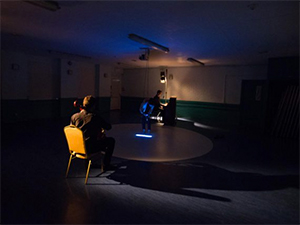 Installation by Tanya Axford, commissioned by the Whitstable Bienniale, 2012.

Leo devised the music for this installation - a combination of fleeting video images projected from pendulums and live musicians reacting to the movement of people within the gallery space.

"...a mesmerising work, the music of cello and piano is beautiful and immersive..." New Statesman Review. 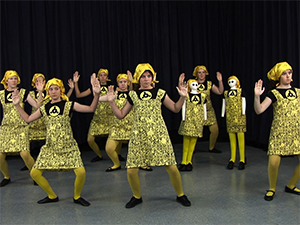 Leo wrote the music and worked on the sound design for this alternately hilarious and disturbing sci-fi video piece and appeared as the character 'Mr. New Structures'. Read an extended interview about the project (with stills) on Jennet's website and view the trailer here. 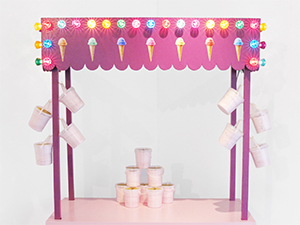 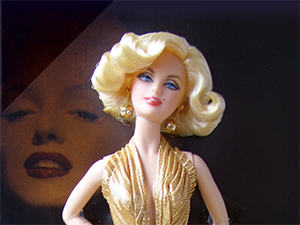 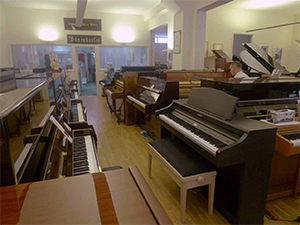 For an event curated by producer / sound artist David Cunningham, Leo wrote a piece for 12 pianos, entitled 'Unison: Things Are Getting Worse". Staged to coincide with Markson Pianos centenary and recorded for broadcast on Resonance FM. Read more about the project on David's website. 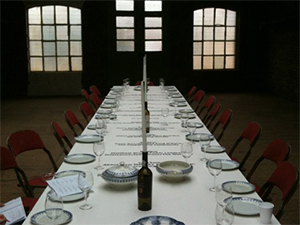 Soundtrack for event curated by no.w.here at the James Taylor Gallery, London.

Leo created a series of 'sonic interruptions' based on 1940s morale-boosting radio broadcasts (with bursts of 'Das Kapital'), to accompany a unique event organised by artists Brad Butler and Karen Mirza of no.w.here, exploring the effects of economic cuts on the arts. "Recessional Aesthetics" was presented at the James Taylor Gallery on 17th October 2010 - read more about it here. 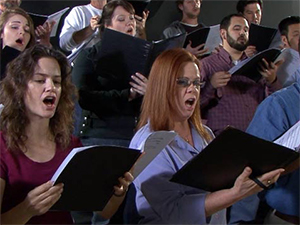 Leo wrote the score for this 45 minute high-definition video installation, which featured a unaccompanied choir singing cult religious texts, filmed on location in San Antonio, Texas. Subsequently re-exhibited in New Zealand, Switzerland, Somerset and Southampton. Read more about the project on the Matt's Gallery website and view an excerpt here.

Press for The Golden Space City of God

"...Grayson commissioned Leo Chadburn to write the music and assembled a choir in Texas to sing it. The results are startling, shocking, distressing, unforgettable. Grayson's piece works as well as it does because everything is revealed so unassumingly… you slowly realise that these insane predictions bear a scary resemblance to world events. Close the book on the 2009 Turner prize, Grayson should be a shoo-in." 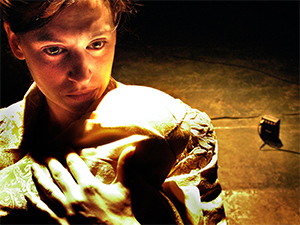 Leo co-wrote a new score for this innovative production of Brecht's play, which toured the UK before a sold-out run at the Cottesloe (National Theatre). He also played the role of 'The Singer' in an acclaimed performance.

Press for The Caucasian Chalk Circle

"…At the production's centre is Leo Chadburn's Singer, who, as narrator and commentator, is a key component of the play's "alienation" effects. A charismatic blend of Scott Walker and Jarvis Cocker, Chadburn has rock-star glamour and a riveting presence. His vocals arrestingly combine crooning and Sprechgesang, and the musical score, created by Chadburn, Chris Branch and Tom Haines, is wildly abrasive." 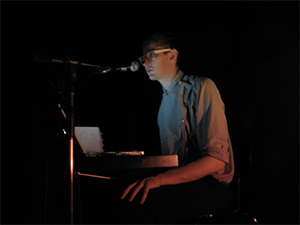 Not Wanting To Say Anything About John Cage (2007)

Commissioned by the Magazin4 Gallery in Bregenz, Austria, Leo created this eery spoken word / storytelling performance with field recordings and electronics, presented as an installation in a black box space. 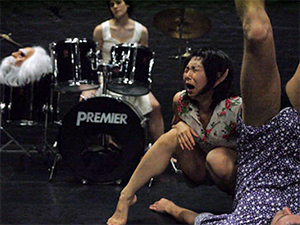 Leo wrote and performed the electronic music in this work, which also featured the Ingrid Laubrock Quintet. It was presented at festivals throughout Europe before a run at the Royal Opera House, Linbury Studio. 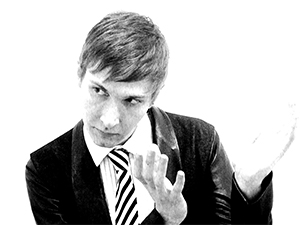 Commissioned by the TwoSee boutique in London, a spoken word solo performance with slide projections and electronics that played with the tropes of the fashion industry, human sense and perception, and automatic writing. 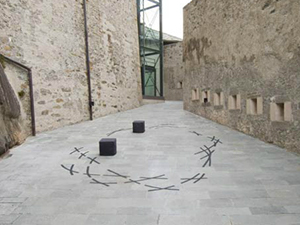 Leo contributed improvised vocals to this sound installation, exhibited at the Galleria Maze, Turin. The voices of five singers in five languages were presented in Dolby surround sound, performing text scores by the artist.